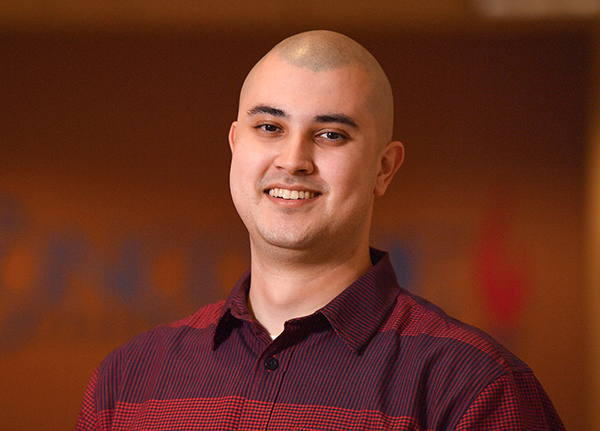 James Harkins is a vocational nurse raised with a giving spirit. The son of parents who both work in law enforcement, he was brought up believing strongly in the value of public service. Little did he know that hard-wired value system would one day save a young human life. But more on that later. First, a little background. After graduating high school in his native southern California, Harkins went straight to work and spent the next five years in the loss prevention/security business. But all the while, he still held onto that goal of public service.

"Nursing provided the pathway," he said. "It provided the most stability. It was easy to get into, and there were a lot of different options as to what environment I worked in." Harkins performed a Google search for nursing schools in the Garden Grove, Calif. area and narrowed it to three schools. Of those three, Concorde Career College at Garden Grove stood out. "What I liked about Concorde was that there was nothing flashy," he said. "They were very upfront, very simple, answered all my questions." "They were more concerned with my education than tuition." Harkins enrolled in Concorde's Vocational Nurse program in July 2013 and graduated 14 months later. "My favorite part of the program were the clinicals," he said. "It was very hands-on. The instructors were very knowledgeable. The best part was working in the ER (emergency room) at Huntington Beach Hospital. I liked not knowing what's coming through the door. It challenged my skills, made me a better nurse."

Putting his skills as a vocational nurse to the test

What he learned and trained for over those 14 months made Harkins feel as though he was ready for anything that might be thrown his way in terms of medical situations. He didn't know until June 8 of last year just how much and how deeply he'd have to call on those skills. Harkins had been working since April 2015 as a health aide in the nurse's office at Bolsa Grande High School in the Garden Grove United School District. Last June 8, he received a phone call that there was an emergency at the school's tennis courts. A student was on the ground, and teachers were starting cardiopulmonary resuscitation (CPR). Once Harkins arrived, he had the highest medical license at the scene, putting him in charge. "I personally did chest compressions for close to 10 minutes and directed other staff to handle the student's airway and another to place AED (automated external defibrillator) pads on him," Harkins said. "Thankfully, I had gotten advanced cardiac support training just a month earlier." Over the next 15 minutes, Harkins administered two shocks to the student from the AED. Fire department personnel and paramedics soon arrived and administered two more. Finally, a pulse was detected, and the student was put in an ambulance and rushed to the hospital.

Earlier last fall, that student walked into Harkins' office and thanked him. "I didn't have time to panic" that day, Harkins said. "If I freak out, he dies. I just kept thinking, this has got to work." Harkins said he credits his training and education at Concorde for being able to answer such a critical call when it came. "At Concorde, I wasn't just taught to be a nurse, I was taught to think like a nurse," he said. "I was able to use critical thinking skills. I was able to put all my skills together and save the boy's life." For his efforts, Harkins was presented the Chief's Coin by the Garden Grove police chief, given to citizens who go above and beyond.