Jamie Bartz has lived a high-flying life, from studying at the U.S. Naval Academy to a variety of U.S. Defense work that required top secret security clearance.

But it was her desire to have a more community focused career in which she could help people one-on-one that led her to Concorde Career College and her current role as a Physical Therapy Assistant (PTA).

The Navy and Security

Jamie was a high school athlete and scholar who earned a spot in the highly competitive U.S. Naval Academy, where she studied aerospace engineering. It was her dream to fly helicopters someday, but she sustained a serious injury during flight school.

She followed up with a master's degree in National Security Affairs-Middle East Studies from the Naval Postgraduate School. But her persistent medical ailments caused her to retire from the Navy as a lieutenant, junior grade.

Her national security credentials paid off in her job search, however. She worked in intelligence for the CIA for more than three years, followed up by other security-focused positions. She moved to San Diego and found more defense work, as well as an industrial security position.

But still nothing had replaced her dream to fly helicopters in the military.

"I was really not satisfied or fulfilled," Jamie said. "I was looking for a way to help people, where I could see the tangible impact, not just for a solider 10,000 miles away on another continent who was hunting bomb makers. Something real in the community."

That's when she started thinking about a career in physical therapy.

"I played sports in high school and college so was no stranger to common injuries," Jamie said. "When I got my serious injury in the Navy, I did physical therapy for that too. I've been around it quite a bit."

She also saw physical rehabilitation as therapeutic for herself, as a way to deal with her own chronic pain.

"It would help me turn that negative into a positive," she said. "By doing physical therapy, I would help people be in less pain and get back the level of function they used to have. That's what I wanted for myself, too."

From San Diego to Albuquerque

Jamie volunteered in the physical therapy field to learn more about it, then enrolled in the PTA program at Concorde. She did look into a different program in the area, but was more impressed with Concorde and its high quality program and instructors.

"I found all the courses really interesting and appreciated a lab with actual physical therapy equipment to learn on," Jamie said. And the faculty were passionate about the profession and truly cared about our success.

She also felt at home because there were many other veterans at the campus.

After graduating in May 2020, she found it tough to find a local San Diego position in the middle of a pandemic. She expanded her search and found out the University of New Mexico Hospital in Albuquerque had an opening.

The hospital is a Level I Trauma Center and a Certified Stroke Center, which means they have "a lot of complex patients who need a significant amount of intervention," she said.

The work -- which includes helping people move and walk safely, exercise and get back to normal life -- is just what she hoped it would be.

"Concorde prepared me better than any other program could have to pursue my new dream of being a PTA," she said. 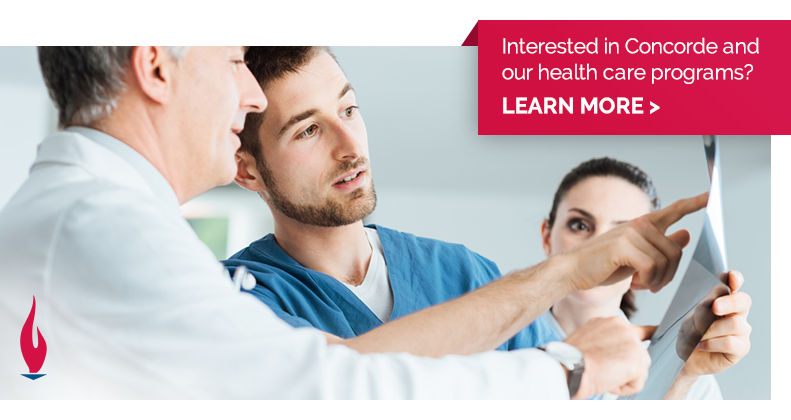